ADHD Fact #23: There Is an Interesting Connection Between ADHD and The Wizard of Oz 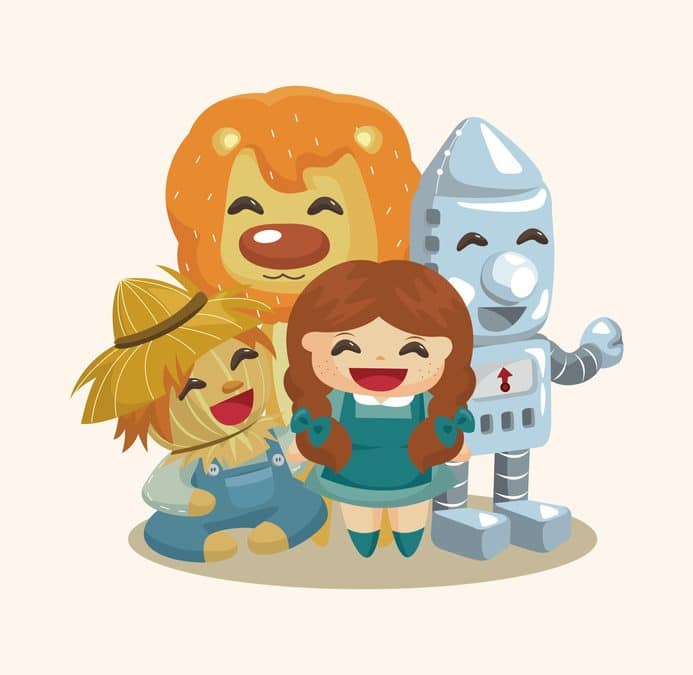 The Wizard of Oz, Halloween, and ADHD
For me, Halloween brings the Wizard of Oz to mind. Most years at least one of the classic characters shows up on our doorstep asking for candy. What can those characters tell us about ADHD seventy-seven years after the movie was made?

The Scarecrow has long regretted that his head is just full of straw. Despite his beliefs about himself as lacking a brain, he demonstrates his intelligence and resourcefulness throughout the story. In the end the Wizard acknowledges his wish for a brain by granting him an honorary degree of Th.D., Doctor of Thinkology.
Being the Scarecrow: We almost always have strengths and abilities that are far beyond what we believe about ourselves. Sometimes it takes another person to call our attention to them. Folks with ADHD have brains that function amazingly when the environment supports them!

The Cowardly Lion is afraid of many things and believes his greatest need is for courage. He apparently thinks courage means never being afraid. In fact he demonstrates that he does have courage (which is actually acting despite your fear) many times during the story. Nevertheless, he wants his courage validated and his reward is a medal for valor from the Wizard.
Being the Cowardly Lion: Individuals with ADHD are among the most courageous I know. They are often under-appreciated because their challenges are misunderstood. They work harder and longer than their peers. Often they experience anxiety and stigma, but they have the courage to keep moving forward, seeking the support they need to function in a world designed for neurotypicals. With a growth mindset they grow in their understanding and appreciation of themselves and definitely deserve a medal for their courage!

The Tin Woodsman wants a heart because he believes he is unable to feel his emotions. However,  throughout the adventure he demonstrates kindness and sensitivity toward his companions, demonstrating his empathy. He is given a heart-shaped watch along with a testimonial expressing his colleagues’ esteem and affection, which he had possessed long before the Wizard brought that fact to his attention by honoring him.
Being the Tin Woodsman: Most folks with ADHD are highly sensitive individuals. Some of them are so sensitive that to protect themselves from pain, they desensitize themselves and appear cold and unfeeling. Eventually those individuals begin to believe that they are unfeeling and uncaring. It can help for the “Wizards” in their lives to let them know how much they are valued and that it is safe to feel their honest emotions.

The Wizard doesn’t seem to be very happy pretending to be something he is not. Perhaps he wants to stop pretending, hiding behind the curtain.
Being the Wizard of Oz: The Wizard is an imposter. Since arriving in Oz he has pretended to be something he is not. It doesn’t seem that he is happy playing that role, but he feels stuck in it. Lots of people are engaged in pretending of this sort. Folks with ADHD may do so because so many people around them are not well informed about ADHD and might judge them harshly. One of the purposes of ADHD Awareness Month is to reduce the stigma and create a world in which neurodiversity is valued and cherished.

Dorothy, a simple farm girl from Kansas, finds herself in a very strange land called Oz, and she just wants to go home. She is determined to travel to Emerald City, because she has heard the great and powerful Wizard of Oz can do anything. She is is certain he can help her get back to Kansas. She gets her wish when she wakes up and discovers she had never left home in the first place.
Being Dorothy: There are many ways to apply the “waking up” metaphor to ADHD:
One waking-up moment can be when someone receives an ADHD diagnosis. Depending on the individual’s age, there can be a flood of emotions at that moment, including

Another moment of awakening might come when someone with ADHD learns to fully accept him/herself just as they are — an awakening to self-acceptance and self-compassion. Isn’t that the goal, the coming home, for everyone?